Our lives are like quilts - bits and pieces, joy and sorrow, stitched with love. ~Author Unknown

My first venture into crockpot world!

While my husband has been in Israel, I have been trying to stay really busy so that I don't only think about how I miss him. It has been such a nice time to catch up with friends and family that I haven't seen in a while. I have had more people over to our new apartment, which I have only been in for about three weeks, than I had over in the whole year I lived in the last apartment!

Anyway, one of the things that I decided to do while Dillon was gone was to explore the slow cooker cookbooks that I have and pick out some things to make. And then actually make them. That's the key... haha. My first choice was to make an Apple Cake. This was the first dish I'd ever made in the CrockPot that we received as a wedding gift. I decided to make it because I knew this was something that Dillon would not like, and I'd rather save those that he WOULD like for when he gets back.

My sister was over when I decided to make the apple cake, so we went to the store and got the necessary ingredients. 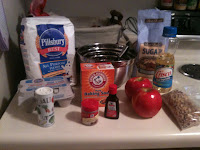 Katie and I have always liked playing cooking show and pretending we are on TV, so that's what we did for the first half of making this cake. It was fun and easy! First, we mixed together sugar, oil, vanilla and eggs. Then we peeled and chopped up two apples (I used Pink Lady because they are a cooking apple and I love their flavor) and added those to the mix.

The peeling and chopping the apples was the longest part of the preparation, but it was just because we were playing around and Katie wasn't a very helpful peeler. I learned that I very much enjoy using the peeler! Next, we added flour, salt, nutmeg, baking soda and chopped walnuts to the mix.

If I had used the cake pan, I was supposed to seal it with foil, so we did the same thing by covering the top with foil to seal the air off in the crockpot. Then we set the timer for 3.5 hours on high.

After we got it cooking, I had to take Katie home. I got back to check on the dessert after 2 hours of cooking. The cake was completely done. One of the edges was even starting to look too brown! So I learned something very useful about setting my crockpot on high! I will have to watch my meals because I guess it works pretty well. Greasing and flouring the bottom and sides worked well, because I turned the crockpot over and the cake flopped out onto the plate. One of the sides got a little crumbled in that process, but otherwise it all stayed together.

I let the cake cool and then tried it. I'd characterize it as more of a huge apple bread or muffin, rather than a cake. Cake implies dessert, or sweet, and this was almost like a breakfast bread. It was also pretty greasy on the bottom, maybe from the cooking spray I used in the crockpot. But
the texture and flavors were great! I'd definitely make and slice it for a breakfast potluck or something. Overall, my first crockpot experience was awesome! I like preparing the food, not so much the waiting for it to cook. But I plan on starting to go home for lunch so that I can make dinner and let it cook while I'm back at work, so that should be great! More blogs about this to come! :)

Posted by Christianne at 4:43 PM